So one of the known from Puppy Care that I am still looking for is: the Party Dress.

And perhaps I have finally at least managed to spot it on someone else's pictures.  It looks very cute but I wonder whether the outfit only exists out of the pink dress or that a white set of underpants also comes with the set.  The person in England, to whom the dogs belong to that are wearing the outfit, has dressed one of the dogs in the dress and adorned the white underpants to another dog.  Whilst no other outfit on the original picture suggests that the white underpants can belong to some other cloting set, it is possible that this person had the Kitty Care Peasant Blouse & Skirt outfit and that the skirt and shirt over time have gone lost since the white underpants seems to be very similar to the one from this Kitty Care clothing set.  In any case, until a set still in its package can be found, we won't know for sure.  However personally I do kinda find it fitting that the dress would come with a set of undies.

(the pair of white underpants and the dress seperately) 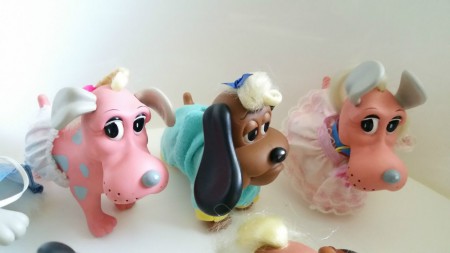 And sadly enough one also popped up on a Dutch second hand selling site, but I was too late to place a bid so it went to someone else.   Should perhaps this person be following this site, I'd love to get my hands on some good and clear shots of the party dress outfit (hint, hint).  For now I can only share some not so clear pictures from the outfit that accompanied the advertisement on the second hand selling site.  As you can see on the last picture, the dog is wearing with the pink dress white underpants so it is most highly likely that the outfit thus exists out of a dress and white underpants.

Webnode, an innovative sitebuilder
Have a captivating website for free!
Get started