Whilst orginally only twelve different cats were produced, this number increased quickly enough thanks to variations in poses and hair color.  In total there are four different poses and so far I know of three different hair colors: pink, blue and purple.  A fun fact is that the male and female cats can be distinguished by their whimpers.  Male cats don't have them whilst the females do.

In the promo shots that were released, there was another very distinguished difference between the male and female cats.  Only the female cats got hair on top of their head.  The line that was released eventually also gave male cats hair on their heads instead of the bold heads from the promo shots.

Each cat came with a little toy the cat can hold in its mouth, a small comb and three ribbons.

The toys exist out of:

and they came in three colors, namely red, yellow and blue. 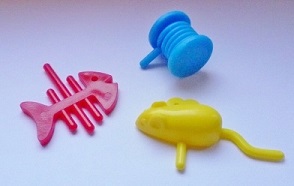 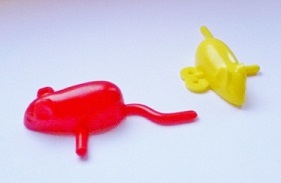 The little combs were also released in these three colors: red, yellow and blue.  And the logo of Kitty Care is found back on each comb. 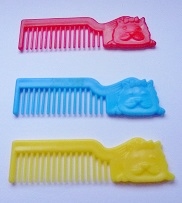