Originally only six outfits were brought out for the Kitties from Kitty Care.  The ball gown, the dress with apron, the pyjamas with dressing gown, the dinner suit, the dungaress with shirt and the peasant blouse with skirt and white underpants.  Each clothing set came with a small comb. 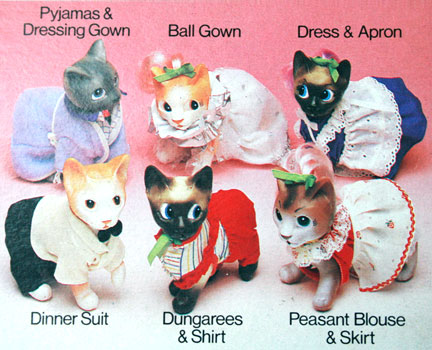 Later on with new lines of Kitties being produced, the fashion line got expanded with two brand new outfits.  A wedding gown and another classy suit.

And seeing as the Puppy Care fashion are all outfits that can also easily be worn by the cats from Kitty Care, I have also decided to collect these.

At the start nine different outfits were brought out for the dogs from Puppy Care.  Two sets of two T-shirts a package, the cape and hat set, the jockey outfit, a kilt with a lace collar, the pyjamas set, a jogging suit and also a nighshirt with cap outfit set.  All the clothing sets came with an added red collar with yellow buckle for your puppy.

Afterwards, when a new line of Puppies came out, three new outfits joined the Puppy Care fashion line.  The party dress, the evening cape and the ballerina outfit were added to the already nine existing outfits.

Further down the line a new promotional image was released for some of the outfits from Puppy Care.  This time some of the outfits on the promotional picture were changed so that their appearance matched finally the appearance of how the outfits had been brought out and were being sold to the public.  The jogging suit and also the nighshirt with cap outfit were changed.  Further more a new outfit appeared on the picture.  This outfit resembling one of the T-shirt outfits from the first brought out line but now with added pants.  Whether this truly is a new added outfit to the already big line of fashion for Puppy Care or anew a fault in the promotional representation of the outfits remains till now unclear.